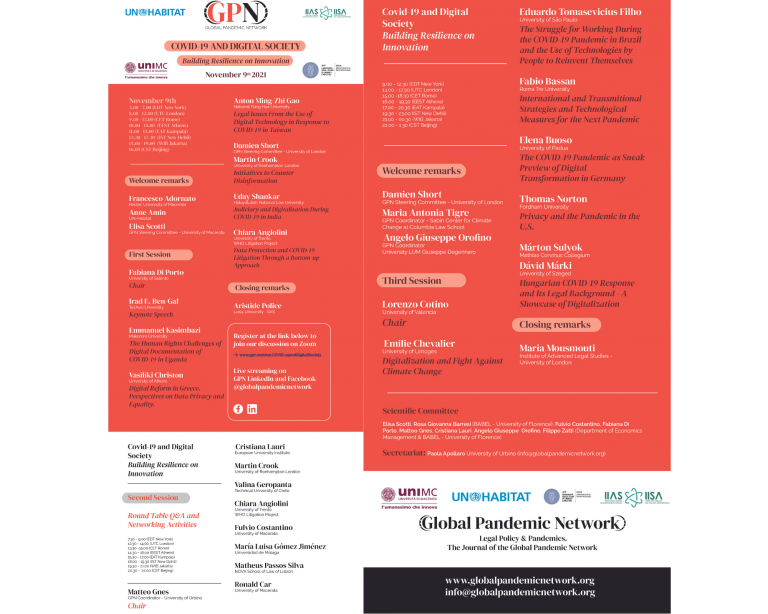 Anne Amin is a legal specialist at the Policy, Legislation and Governance Section of UN-Habitat with twenty years of international professional experience in a variety of different areas, including advisory services in legislative processes, legislative drafting, capacity building and research. Her areas of expertise include urban governance, physical planning law and human rights. Anne holds a Master’s degree in Law from the University of Helsinki, Finland, with a specialization in International Tax Law and a Master’s Degree in International Law from the University of Paris VIII, France. She is fluent in English, French and Spanish.

She has published or co-edited 5 books, she is author or co-author of more than 80 academic articles and book chapters, and she has been invited to give lectures and present her work at conferences, workshops, and seminars on over a hundred occasions in several different countries.In her most recent work, she is experimenting into what AI can bring of good to simplifying law, making public governance and rulemaking future-proof, enhancing social co-existence

Emmanuel  Kasimbazi- The Human Rights Challenges of Digital documentation of COVID-19 in Uganda.

Vassiliki Christou (born 1979) is Assistant Professor of Constitutional Law at the National and Kapodistrian University of Athens, Faculty of Law since 2020. She studied law (1997-2001) and legal philosophy (2001-2003) in Athens Faculty of Law, while she holds a PhD Degree from the University of Heidelberg, Faculty of Law (2006), all with distinction. For her doctoral studies she received a scholarship from DAAD. She has been a Guest at Max Planck Institute for Comparative Public Law and International Law in Heidelberg twice (2007, 2012) and has also visited the University of Cambridge, Wolfson College as a Visiting Scholar Research Associate (2018). She has written three books and a number of articles in legal journals and collective works in Greek, English, and German. Her fields of expertise are freedom of expression, data protection and privacy, separation of powers, representative democracy, civil liberties in the pandemic. She is also interested in modern political philosophy (emphasis on John Rawls and Martha Nussbaum) and comparative public law.

PhD in Law, Institute of Environmental and Energy Law, K.U.Leuven, Belgium Anton received a master Degree (MA) from National Taiwan University and wrote a thesis on electricity liberalization in the EU, Germany, France, UK, US, California, Pennsylvania and Taiwan. He received another master Degree in energy and environmental law (LLM) from K.U. Leuven in July 2005. His main research focus is on energy and environmental law, including their interaction. He worked on several government-funded projects with an energy thinking tank, i.e. Taiwan Research Institute, in 2001-2004. In recent years he has published several articles and made several presentations on international renewable energy law, construction and demolition waste, energy liberalization & energy security, and European Directive on strategic environmental assessment (SEA)

Professor Damien Short is Co-Director of the Human Rights Consortium (HRC) and a Professor of Human Rights and Environmental Justice at the School of Advanced Study. He has spent his entire professional career working in the field of human rights and environmental justice, both as a scholar and advocate. He has researched and published extensively in the areas of indigenous peoples’ rights, genocide studies, reconciliation projects and environmental human rights. He is currently researching the human rights impacts of extreme energy processes (e.g Tar Sands and Fracking – see our designated HRC website http://extremeenergy.org) . Professor Short is a regular academic contributor to the United Nation’s ‘Expert Mechanism on the Rights of Indigenous Peoples’ and an academic consultant for the ‘Ethical Trade Task Force’ of the Soil Association. He is also the Editor in Chief of the International Journal of Human Rights (Taylor and Francis) and Editor-in-chief of the Journal of Human Rights in the Commonwealth (University of London) and convenor of the British Sociological Association’s Sociology of Rights Study Group and an active member of the International Network of Genocide Scholars. Professor Short has also worked with a variety of NGOs including Amnesty International, War on Want, Survival International, Friends of the Earth, Greenpeace and the International Work Group for Indigenous Affairs; and with a range of campaign groups including Eradicating Ecocide, Biofuelwatch, Climate Justice Collective and the UK Tar Sands Network. He currently advises local anti-fracking groups in the UK and county councils on the human rights implications of unconventional (extreme) energy extraction processes such as fracking.

Uday Shankar - Judiciary and Digitialisation during Covid 19 in India

Prof. Uday Shankar is Associate Professor of Law at Rajiv Gandhi School of Intellectual Property Law, Indian Institute of Technology Kharagpur. He holds a PhD from University of Delhi. He was in the Global Intensive Programme for Young Leading Scholars by International Association of Constitutional Law (2018); he was Magdalene Schoch Fellowship, at Faculty of Law, University of Hamburg (2017). He was awarded fellowship by the Max Planck Institute for Comparative Public Law and International Law, Heidelberg, Germany (2008). His research areas are Constitutional Law; Socio-Economic Rights; Energy Law; Employment Law; Public Law and IP Interface.

University of Trento / WHO Litigation Project

Professor Aristide Police has an extensive and all-round experience in all sectors of administrative law. He is listed in the highest sector rankings, such as “Hall of Fame” (Legal500) and “Star Individual” (Chambers). He is particularly experienced in the field of public procurement and concessions, public law economics, privatisation of public companies, relations with independent administrative authorities, administrative litigation, proceedings before Italian Supreme Audit Institution and economic and infrastructural planning, as well as EU policies and funding. Professor Police’s academic career is equally significant. He is currently Professor of Administrative Law at the LUISS “Guido Carli” University, having previously held the same position at “Tor Vergata” University in Rome and at the University of Teramo. At the same time, he was appointed Adjunct Professor at the Law School of China University of Political Science and Law in Beijing. He is an Alumnus of the London School of Economics and Political Science. He has been a member of the Board of Auditors of the Italian President of the Republic’s Office, of the Commission for access to administrative documents at Italy’s Prime Minister’s Office and of several Ministerial Commissions, including, most recently, the commission for the drafting of the new Regulation implementing the Italian Code of Public Contracts. He has been a Director of public and private companies, including as Chairman of Alitalia (2006-2008). In 1993, he was admitted to the bar and in 2001, to practice before the Italian Supreme Court.

Round Table Q&A and Networking Activities

Lorenzo Cotino Hueso, Professor of Constitutional Law at the University of Valencia (“Catedrático), former judge of the High Court of Justice of the Valencia Region (2000-2019). PhD in Law and Graduate and Advanced Studies in Political Science, Guest professor at Konstanz (Germany) since 2004 and honorary professor of Universidad Nacional of Colombia and U. Católica de Cuenca (Educador). Author or editor of 20 books, he has written over 150 scientific articles and book chapters. President since 2004 of National Association

Emilie Chevalier (F) is an Associate Professor in European and Public law in the Law and Economics Faculty of the University of Limoges. She obtained a PhD from the University of Limoges in 2010, after an LL.M. in International, European and Comparative Law in Maastricht University (2004). Her PhD analysed the principle of good administration and European Union law (published with Bruylant-Larcier, 2014). She has extensive teaching experience in the field of European and administrative law. Her fields of research are European administrative law, administrative procedural rights, European environmental law and the procedural enforcement of European law at national level. She has taken part in international and European research projects, and published chapters and articles in French and in English. She has coordinated several research and publication projects (Research project funded by the French Constitutional Council “QPC et droit de l’environnement”), and she is part of the steering committee of the transnational administrative law network. She published “Institutions européennes” (with O. Dubos, Dalloz 2019). She is co-heading the teaching international program ‘European Studies’ at the University of Limoges (2019). Since September 2018, she is the vice-dean of the Law and Economics Faculty of Limoges in charge of international relations

Eduardo Tomasevicius Filho.J.D in Laws (2001), Ph.D. in Civil Law (2007) and Habilitation(“associate professorship thesis”) in Civil Law (2017) at the University of Sao Paulo -USP. Associate Professor of the Department of Civil Law of the University of Sao Paulo Law School. Leader of the Research Group “Civil Law in Network Society” about data protection laws and artificial intelligence, as well as the right to the city. Lawyer and legal advisor in Sao Paulo

Prof. Elena Buoso is associate professor of Administrative Law at the School of Law in Padua. She has been visiting fellow in several Research Institutions (Max-Planck-Institute for comparative public Law in Heidelberg (2007-2008); Humboldt Universität zu Berlin (2009); University of Reading (2011), Universidad de Alicante (2019); visiting professor at the Julius Maximilian Universität, Würzburg (2015-16) and appointed professor at the Universität Innsbruck (2017-21). She is interested in administrative and constitutional law as well as in environmental, urban and digital law.

Thomas Norton - Privacy and the Pandemic in the U.S..

Tom Norton is the Executive Director of the Center on Law and Information Policy (CLIP) and a member of the Adjunct Faculty at Fordham University School of Law. Tom earned a JD from Fordham and served as CLIP’s Privacy Fellow from 2014 to 2016. Prior to returning to CLIP as Executive Director, Tom was a litigation attorney at the law firm Arent Fox LLP in New York City.

Senior Lecturer in Constitutional Law and Human Rights. Graduate of Law and Political Sciences from the Faculty of Law and Political Sciences at the University of Szeged (SZTE, 2007). In 2009, he completed an American Legal Expert training at SZTE, in cooperation with the University of Toledo College of Law (OH, USA). In 2017, he successfully defended his PhD theses in law and political sciences (summa cum laude), examining the comparative constitutional law aspects of fair trial and the protection of privacy. At present, he is a senior lecturer at the Institute of Public Law at the same university, while also managing their English-language Master in International Relations program. Between 2015-2020, he served as an Alternate Member of the Management Board of the Fundamental Rights Agency of the European Union in Vienna. In the fall of 2020, he joined the team of MCC (Mathias Corvinus Collegium) in Budapest, where he currently heads the Public Law Center. He publishes nationally and internationally in English, French and Hungarian in the fields of (comparative) constitutional law, European human rights protection, constitutional identity, the relationship of national constitutional courts to EU law.

Assistant research fellow at the Public Law Center at the Mathias Corvinus Collegium (MCC) School of Law (Budapest, Hungary) (since 2020) and assistant lecturer at the University of Szeged Faculty of Law and Political Sciences’ Institute of Public Law.Since February2021 he isprogram coordinator of the Legal Clinic (University of Szeged)that provideslegal aid for the indigent, to maintain connections with the local interest-groups and their representatives, and members of the civil organizations.PhD Candidate (University of Szeged), his field of research is the criminal justice system with particular attention to the publicity of court procedures, and the relation between the media and criminal procedures.